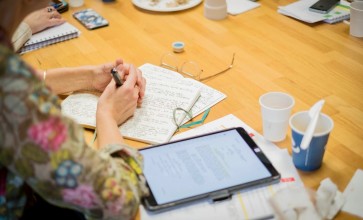 We are excited to announce the upcoming deadlines to apply to our annual labs for feature film and TV series projects.

Structured around 3 workshops and a final presentation in front of the industry, these comprehensive training initiatives are a unique opportunity to enhance the project development, to network with participants from all over the world as well as to acquire a deep knowledge of the industry.
ScriptLab – for feature film projects in early development stage
Call for applications open from end of August to October 23rd

ScriptLab is TFL’s flagship screenwriting programme for international writer/directors, with all ranges of experience. Over a 9-month creative process, it focuses on the development of the treatment and/or first draft(s) of the project, through peer to peer group work and with the support of professional script consultants. Additional film professionals are invited to discuss their own areas of expertise and to give more specific advice and inspiration for the projects & the filmmakers’ careers.

The first workshop will take place in Lviv, Ukraine, in partnership with Lviv Film Commission. The programme will welcome one project from Switzerland and the Flanders region of Belgium thanks to TFL’s partnership with Swiss Films and VAF – Flanders Audiovisual Fund. We are also glad to announce our new partnerships with Austrian Film Institute and German Films, supporting the participation of projects from Austria and Germany in ScriptLab and/or FeatureLab.
ScriptLab – story editing – for film professionals interested in gaining an insight into the development process and in working with authors
Call for applications open from end of August to October 23rd

ScriptLab – story editing is a hands-on training for film professionals who want to work with writers and directors in the development stage of their fiction feature film projects. Participants will acquire skills in the fields of treatment and script analysis, assessment of project development and script consulting.
FeatureLab – for feature film projects in advanced development stage
Call for applications open from end of October to January 18th

FeatureLab is addressed to international creative teams of director and producer (together with a scriptwriter, if on board), developing their 1st or 2nd feature film projects – fiction, creative documentaries, experimental, animation and any possible kind cinema form. Throughout the year, the film teams benefit from individual and group sessions with a variety of trainers, from the main areas of filmmaking: script, directing, cinematography, sound, post-production, but also of production, financing & sales and audience engagement.

The first FeatureLab workshop will take place in Madrid, Spain, in partnership with Comunidad de Madrid and Ayuntamiento de Madrid. These institutions will also support the participation of one project from Spain in FeatureLab 2021. Thanks to the partnerships with Austrian Film Institute (hosting the second workshop) and German Films, Austrian and German projects will also be considered for FeatureLab.
SeriesLab – for European TV series concepts at an early stage
Call for applications open from beginning of December to February 1st

SeriesLab is an advanced training course for European scriptwriters and directors with long TV series projects at an early development stage.

The lab stands out for involving all the main players of TV series production – scriptwriters, producers and TV broadcasters –, and for offering a close link between scriptwriting process and TV industry. The aim is to draft the treatment of the pilot and the concept presentation (mini-bible) of the project.

SeriesLab is organised in partnership with Millimeter Film, hosting the first workshop in Tbilisi, Georgia, and VAF – Flanders Audiovisual Fund. Thanks to this partnership, SeriesLab will welcome one project from Georgia and the Flanders region of Belgium.
Furthermore, a number of intensive online and residential workshops will take place in 2021 in the frame of the TFL Extended and TFL Next initiatives. Targeting film professionals from all over the world, these training courses aim at connecting with peers from all over the world and boosting their projects’ development.